“I am with you! You will carry my word! I do a new thing in you!” Hallelujah! That’s how the 10th day of my journey (9th day on the ground here in Africa) has ended. Gloraaayyy!!! Let me back up to the beginning…

As the day began I was thanking God for a restful night. Recall that Thursday night was rough and yesterday during the day wasn’t much better. The Lord strengthened me to minister last night, return to the hotel, eat my first Liberian Style Chicken dinner this trip and go to bed. This morning, though feeling better, I was still kinda queasy so made it a point to eat half a piece of toast and drink half a cup of tea (strong tea!) before heading to the church to conduct an extended training session.

The training was awesome. As you can see, there was a nice turn out. It was probably the largest group of ministers and church leaders that I’ve ever had the pleasure of serving here outside of the conferences that we’ve held when teams have joined me from the States. Like in Ghana, we spent time discussing what ministry really is all about and we also had small groups (20 of them!) discuss what’s on people’s mind here in Liberia and then report out so that we could capture prayer points. Shockingly, one of the #1 issues that was raised is ritual killing! People (mostly children) are being kidnapped and murdered because those who want to get connected to power as the nation looks to the 2017 elections believe that these despicable acts will supernaturally (demonically!) give them power. Satan, the Lord rebuke you!!! We paused the training and we prayed against that foul spirit! We declared there would be no more ritualistic killing anywhere in Liberia and that those who have perpetrated these acts (and the people who seek to benefit from them) will be exposed. We declared that no one who seeks to rise to power by any means other than the will of God will succeed in Jesus’s name! (Now that’s a prayer for America, too, don’t you think?!?)

After the training I went on a brief shopping trip (to Benson St., where else?!?) to find a shirt for the service tonight. I am bigger than most Liberian men so finding a shirt that fit (in the style I wanted) was no small feat, let me tell you. Still, with the help of Pastor Harris I found one.

Back at the hotel, I had a few hours to rest before getting ready for service. Somehow I wound up doing some work instead—and trimming “grandpa” (my sideburns and beard). I was going to shave it all off (except for the mustache and hair on my chin) but my wife asked me not to since she likes it (and if Mama likes it, it stays!) Before I knew it, it was time for service! I decided not to wear the shirt I’d gotten so put on my “American” shirt and bow tie instead—only to change my mind and wear the new shirt instead. I think I look pretty spiffy if I do say so myself (pictured with Pastor Harris)—and all of the Liberians said so, too! 🙂 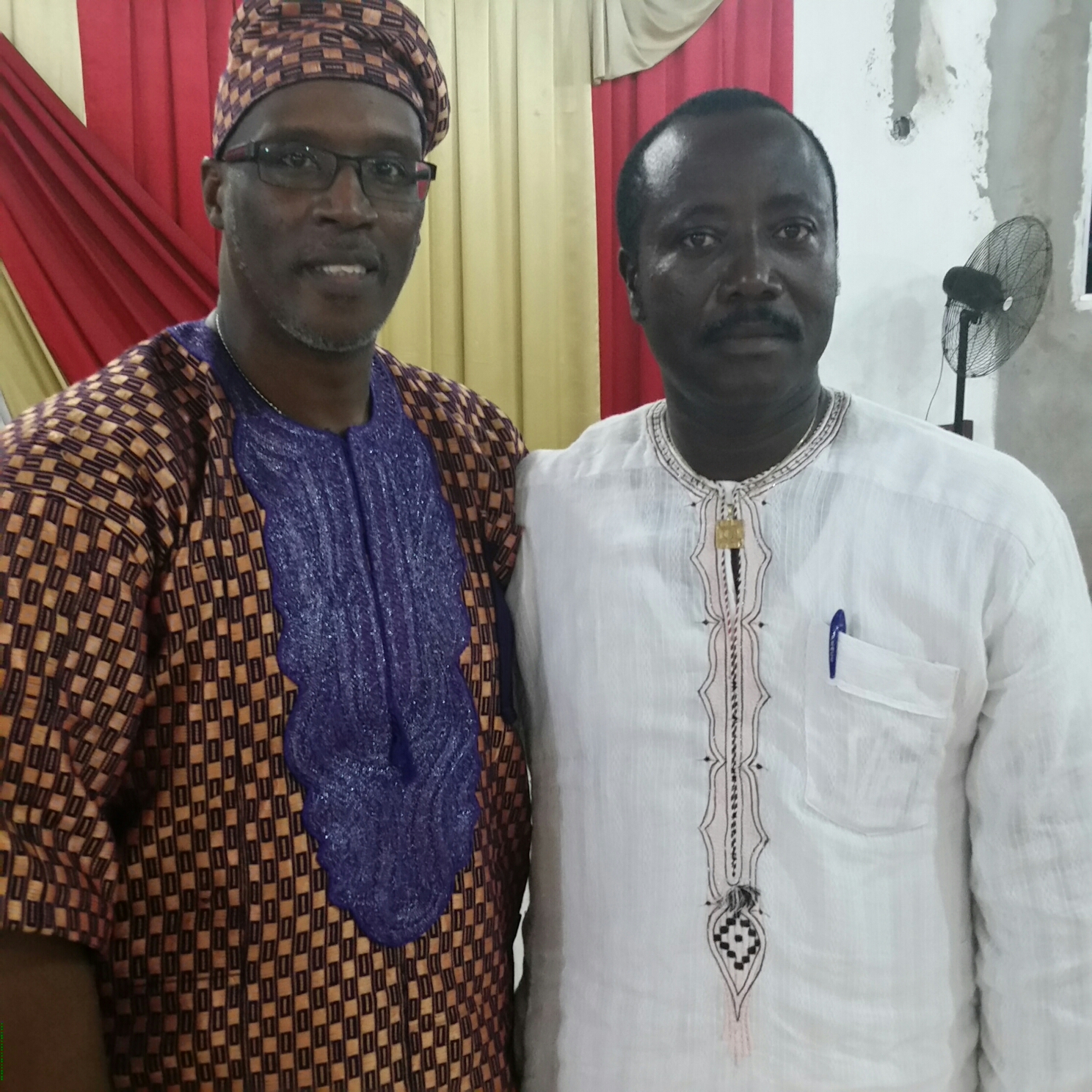 Service was OFF THE HOOK!!! Pastor Wennie ministered the word (he had 3 or 4 sermons rolled into one but the title that I captured that stood out most for me was, “Discover Your True Identity”)! Before he preached, the Praise Team and the 250+ people gathered sang a South African song, “I know who I am!”. Well, did the heavens open and the angels join in or what?!? Somehow, I’ve got to bring that song back to New York with me! Get ready, Min. Kim!

After the word, Pastor Wennie conducted an anointing service but it wasn’t what you might expect—sure wasn’t what I expected! Wait, before I go there, let me talk about how the word ended. Faith To Face, the man went to Acts 12 (somebody shout, “In prison…but prayer!”)! He zeroed in on the gates of the prison that Peter was being held in and how Jesus had told Peter that “the gates of hell” would not prevail against the revealed truth on which the church is built. Beloveds, we proceeded to declare that gates are destroyed in our lives, in the lives of our loved ones, in the lives of our churches. Gates of sickness, frustration, financial delay, premature death, accidents and any other gates that would imprison us. (You know I called out the Java gate, Cullen!) O, but that’s not where it ended. You see, it’s not enough for the gate to be destroyed. You’ve got to walk through the opening that is left in its wake—otherwise, you remain imprisoned even with no gate stopping you. After destroying the gates, the Lord directed Pastor Wennie to have us walk through the opening. Nope, even that wasn’t enough. He saw in the spirit that not only were there gates that had been closed but there were doors that had been closed. Together we declared that every door that had been closed and blocked the blessings of God was opened in Jesus name! Yep, after the doors were opened, he challenged us to walk through the open door and retrieve our blessings. Without missing a beat you had 250+ Africans and 1 African American walking in that church and retrieving our blessings. I took my titles and degrees and walked through the openings left by the gates that had been destroyed and the shut doors that were now open and retrieved every promised and prophesied blessing I could recall for myself and my wife, our children, our family, our church and our ministries!!! Well, tell Him thank ya!!! (Lord, I’m trying not to run out of this hotel like my hair’s…uh…head’s on fire!!!)

OK, back to the anointing service. I guess that at the beginning of the revival (tonight was the 20th night!) the people had been directed to bring oil on the 20th night for it to be blessed. Well, following the leading of the Lord, Pastor Wennie directed the people to hold their oil up, he prayed a prayer of blessing and then directed everyone to open their oil, pour a “small small” amount in their hands and then close the bottle and put it out of the way because the power of God was going to fall and they didn’t want their bottles broken. Watch this: Before he’d prayed, he’d first directed the altar workers to bring their oil to the altar and leave it there while he prayed since they were going to need their hands free. He prayed…and down went the first wave of people under the power of God! No man laid hands on anyone! Now with the oil in the hands and bottles tucked away (and the altar workers invited back to open their oil, put some on their hands, close it back up and return to their stations), Pastor Wennie directed the people to lay hands on themselves and, well, this is kinda what happened next… 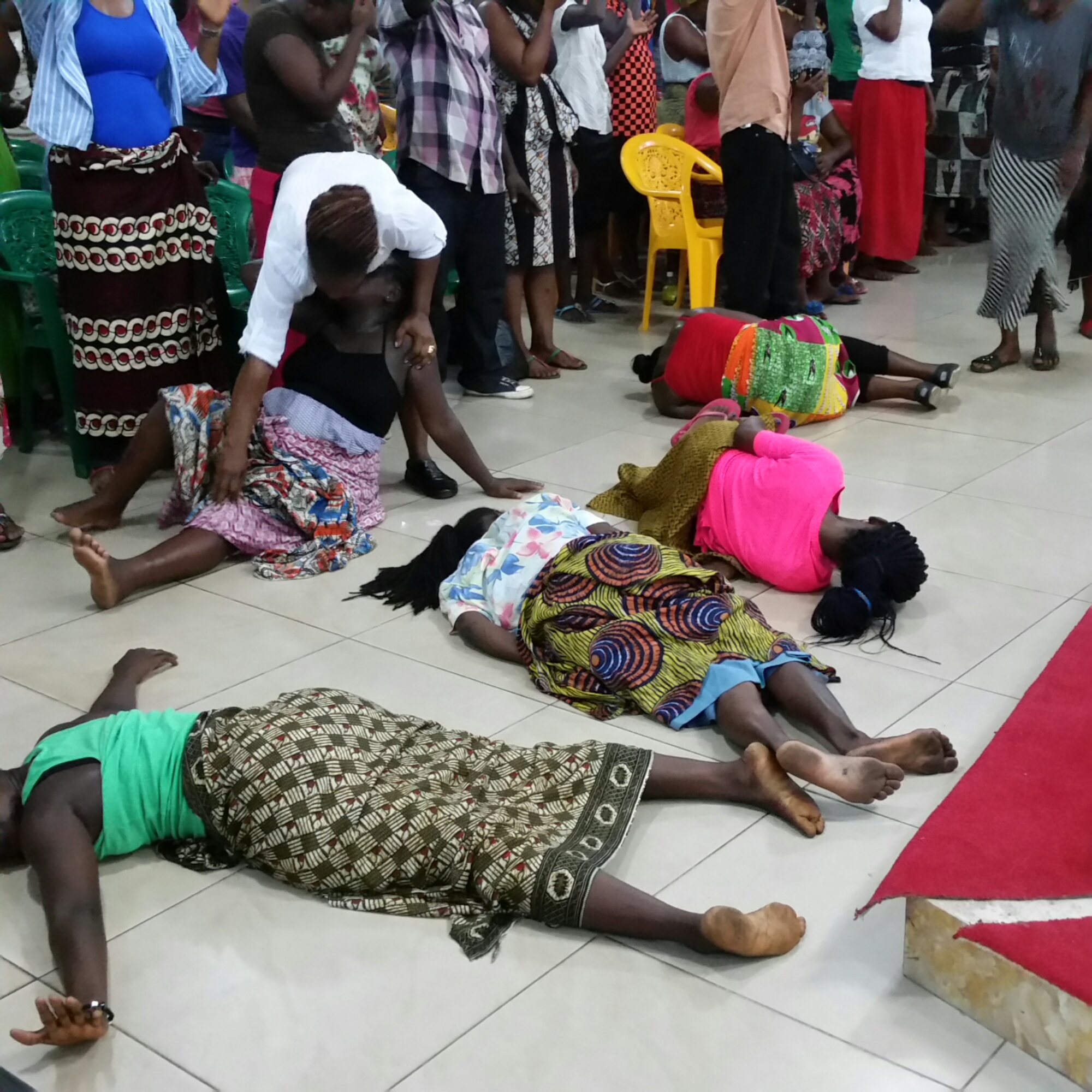 What else could we do after that? It was time to celebrate! Lord, the people broke out in a Nigerian (Eboh?) song and danced a while. At one point Pastor Wennie motioned for his wife to join him and Mother Wennie led us to another level in praise! The woman danced, do you hear me Pastor Jeanette?!?! Hallelujah!!! Honey, as the Wennie’s danced you know I was missing Mother Vaughn (my Lady Jai!). Had you been here I probably would have grabbed you and absolutely danced myself silly. Instead, I danced with Mother Wennie and still almost had a fit! Then Pastor Wennie declared that tomorrow we’d really see some dancing as we celebrate the last day of the revival (and the 20th anniversary of Overcomers’ church—I’m the anniversary speaker, by the way!). He told the church they hadn’t seen him really dance yet. Help, Lord! You know I’m not going to be any good! We may dance to different beats and move in different ways but I already know this grandpa is gonna pick ‘um up and put ‘um down! When I think about what the Lord has done for me (just on this trip!), when I think about how the Lord has set me free, when I think about how the Lord has brought me out, I can dance, dance, dance, dance, dance…!!! Gloraaayyy!

OK, I’m back. I didn’t make it to Sunday, I had to dance around my hotel room a minute! So, back to where I started this post. The word that I captured was released by…wait for it…Mother Wennie! She and Pastor Wennie had stopped by the hotel for a visit because I might not get a chance to spend any time visiting with Mother Wennie between now and when I leave on Tuesday. Well, as we talked, the presence of the Lord was tangible in this room. As they got up to leave, Pastor Wennie asked me to pray and during the prayer the Lord directed me to pray for the stirring of the gift of the prophetess in that woman. IMMEDIATELY, she began to prophesy, “I am with you! You will carry my word! I do a new thing in you!” Hallelujah! So, like I said from the beginning, that’s how the 10th day of my journey (9th day on the ground here in Africa) has ended. Gloraaayyy!!!