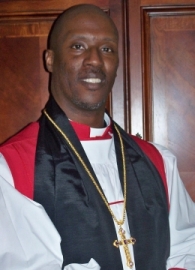 OHMIPF’s Presiding Prelate, Reverend Dr. Mark D. Vaughn was born and raised in Elmira, New York. It was there, in 1975, that he accepted Christ as his savior at the age of 11. By the time he left for college (to attend Rochester Institute of Technology in Rochester, New York) 7 years later, he had grown in the faith and had established himself as a bible scholar and teacher of all age groups.

Vaughn earned an Associates Degree in Physics w/Honors at Rochester Institute of Technology. During his time in Rochester he became a youth leader at Bethesda Church of God in Christ. The Lord used him and fellow RIT student, Jeanette Brooks (who became Mrs. Jeanette Vaughn in 1986 and is now Faith To Face’s Co-Pastor), to win many college students to the Lord. Five children have resulted from their 21 year union: Karissa (16), Kyela (15), Cullen (12), Carrington (8), and Clayton (5).

In the Fall of 1986 Vaughn relocated, with his new bride Jeanette, from Rochester to his hometown of Elmira. In early 1987, he accepted the call to ministry and was licensed in ministry later that same year by Dr. Cephus McGee, Jr., pastor of All Saints’ Home Church of God In Christ. Vaughn became the Youth Minister and a leading ministerial associate at the church that he’d grown up in.

He continued his studies at Alfred University where he earned a Bachelors degree in Physics in 1991. While studying at Alfred University, he also worked full-time as a research technician for Corning Incorporated (where he’ll celebrate 20 years of employment in 2008). Today, Vaughn is the Manager for Diversity Recruiting and Technical Talent Pipelining for the company’s Technology Community. His technical contributions have been widely cited, and in 2007 he was nationally recognized as a Black Engineer of the Year by Career Communications Group.

Rev. Vaughn continued to grow in grace and in the knowledge of his Lord and Savior even as he yielded to the leading of the Lord to pursue graduate studies at the University of Rochester where he earned a Masters degree in Optics in 1993 and at Georgia Institute of Technology where he earned a Ph.D. in Electrical Engineering in 1998. Throughout this season of academic training, Pastor Mark became more and more active in ministry. He was ordained in 1996 by Bishop Chandler Owens, presiding Prelate of the Churches of God in Christ and accepted the call to pastor in 1997, a call that he’d first heard in 1985.

In 1998, Dr. Vaughn founded Faith To Face Ministries along with his wife in Corning, New York. The ministry became one of the fastest growing, multi-cultural congregations in the area and is now highly regarded as a local assembly with a global vision. Dr. Vaughn has continually provided cutting edge vision and leadership, and is world renowned for his teaching and preaching (having been the guest revivalist at city-wide crusades and leadership conferences in Monrovia, Liberia, West Africa several times in the last few years). During Pastor Vaughn’s travels abroad he has had audiences with national leaders and directed missions giving amounting to tens of thousands of dollars. These moneys are being used to erect shelters for the displaced, and provide clean drinking water for those with no other access to it.

Though a global visionary, Dr. Vaughn is also a highly regarded public servant at home. He presently serves on the Board of Directors of the United Way of the Southern Tier and served two terms as an elected member of the Corning-Painted Post Board of Education.

In 2006, Pastor Mark acknowledged the call to the elevated office of Bishop – a call he’d first received in 1985 (the same year he was called to the ministry). This acknowledgment was further validated in 2007 when the pastors in Monrovia, Liberia, with whom he’d been in relationship since 2001, unanimously agreed to make him the Bishop over their fellowship which is now known as On tHe Mark (OHM) Liberia. Bishop-designate Dr. Vaughn was consecrated to the office of Bishop on November 30, 2007 in Corning, NY.