On The Mark International Pastoral Fellowship (OHMIPF) enjoyed it’s informal beginnings as the result of an encounter by two pastors in the summer of 2001. Dr. Mark D. Vaughn, pastor of Faith To Face Ministries in Corning, NY happily made the acquaintance of Solomon Ogunwumi, pastor of Christ Apostolic Church in Monrovia, Liberia, West Africa. Pastor Solomon was in the states, for the first time, to witness the marriage of his son Dr. Stephen Ogunwumi to the then Dr. Rochelle Ingram. Stephen and his brother, Prophet Peter Ogunwumi (then a new partner at Faith To Face) introduced the pastors and a bond was immediately formed.

Over the course of 4 months, the pastors spent a great deal of time in fellowship culminating with an invitation by the African for the American to visit Liberia and conduct a revival and leadership training. Prayerful consideration revealed that the time wasn’t yet established so the visit was not made.

Almost exactly a year later, Pastor Solomon was back in the states for the wedding of Prophet Peter to the then Andrea Miles (both Ogunwumis are leaders at Faith To Face). Again, several months of fellowship culminated with an invitation to visit and minister in West Africa. This time, the release was clear and the trip was made.

On the ground in Monrovia, Liberia in February, 2003, Pastor Vaughn and his assistant, Minister Ricardo Rowe, experienced the impact of a generation of civil war first hand. At one point rebel forces came within mere miles of the Monrovia. Still, friendships were formed and a fellowship began to flourish.

Return trips to Liberia (with Pastor Vaughn leading larger and larger delegations from the states) revealed more of what was clearly on the mind of God. Pastor Vaughn and Faith To Face Ministries had been called to the Republic of Liberia and West Africa. Pastor Solomon Ogunwumi along with Pastors Christian Gbanea, Joseph Karlon, Zack Roberts, Anthony Wennie, Mulbah Zayzay, Elder Sam Ogunwumi and Bishop Francis Thomas formally acknowledged this call and recognized Pastor Vaughn as the Bishop of the fellowship in September, 2006. The fellowship became officially known as OHM Liberia in August 2007. 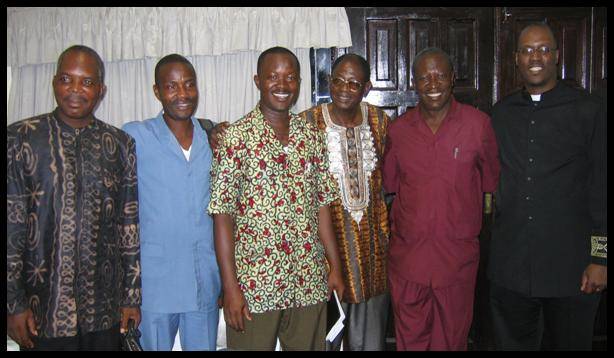 So where’d On The Mark come from and why isn’t the acronym OTM?

Bishop Vaughn formally established On The Mark Ministries in 2005 as the umbrella for all that he’d been called to in ministry and in deference to the proclamation of Paul in Philippians 3:13 and 14, “Brethren, I count not myself to have apprehended: but [this] one thing [I do], forgetting those things which are behind, and reaching forth unto those things which are before, I press toward the mark for the prize of the high calling of God in Christ Jesus”.

When the Lord decreed that the time had come to establish an International Pastoral Fellowship, On The Mark was the obvious moniker. And OHM? Bishop Vaughn is a scientist by training, having earned a PhD in Electrical Engineering. The Lord impressed upon him that the work of the fellowship in Liberia, here in the states and around the world was to help positively impact pastors in the press thereby helping them and their flocks resist the enemy so that he has to flee (James 4:7). In engineering, resistance is measured in units called Ohms—hence OHM.